“ORGANIC FOOD”: FACTS YOU SHOULD KNOW

Pandemic has made people change their attitude towards food.

Here I bring to you how the Facts about Farming, its methodology and for you to decide the future:

However, it brought along with it:

To meet with the demands of the increased population and overcome the disadvantage we discovered:

In fact, I would also like to present to you,

STUDIES ON CORRELATION BETWEEN CONVENTIONAL FOOD CONSUMPTION AND HUMAN HEALTH

Residues of these harmful chemicals have become a part of our diet via food chain and it has shown adverse effects on human health.

“Organic agriculture is a production system that sustains the health of soils, ecosystems and people. It relies on ecological processes, biodiversity and cycles adapted to local conditions, rather than the use of inputs with diverse effects. Organic agriculture combines tradition, innovation and science to benefit the shared environment and promote fair relationships and a good quality of life for all involved”.

AND SO, the question arises …

How do we learn from the past, use the latest technologies and come up with a solution?

Over the period of years science has time and over again proved that microorganisms play a vital role in plant, animal and human health. This tiny little bacteria, fungi and yeast when used properly can create wonders and thus the study called as biotechnology came into existence.

We have been able to create wonderous medication using biotechnology which have helped in various disease control. 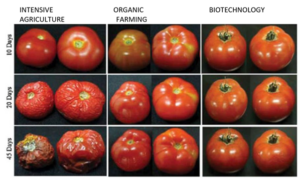 Stay tuned to my next blog on biotechnology for Agriculture , how Exome products are in a way revolutionary and game changing

Great results with our Products